Broad Match Modifier is Gone: Here Is What To Do Next 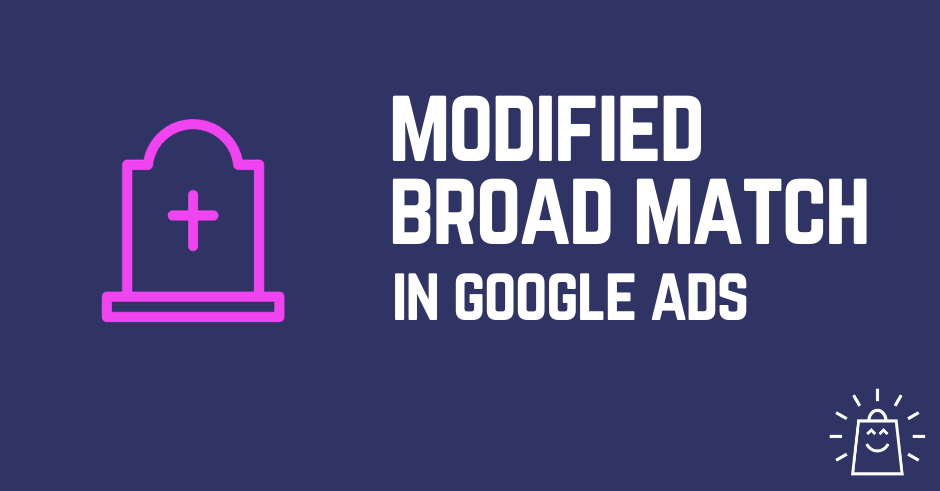 After years of tinkering with keyword match types, they’ve made yet another change.

The short version: broad match modifier stops being a match type ☠️  and an “updated phrase match” will take its place instead.

In this article, we break down what exactly is changing and how to best prepare your campaigns to deal with this change!

What exactly is changing?

A “new phrase match” will show up for many of the same queries as modified broad match did.

That leaves us with three match types available in Google Ads: 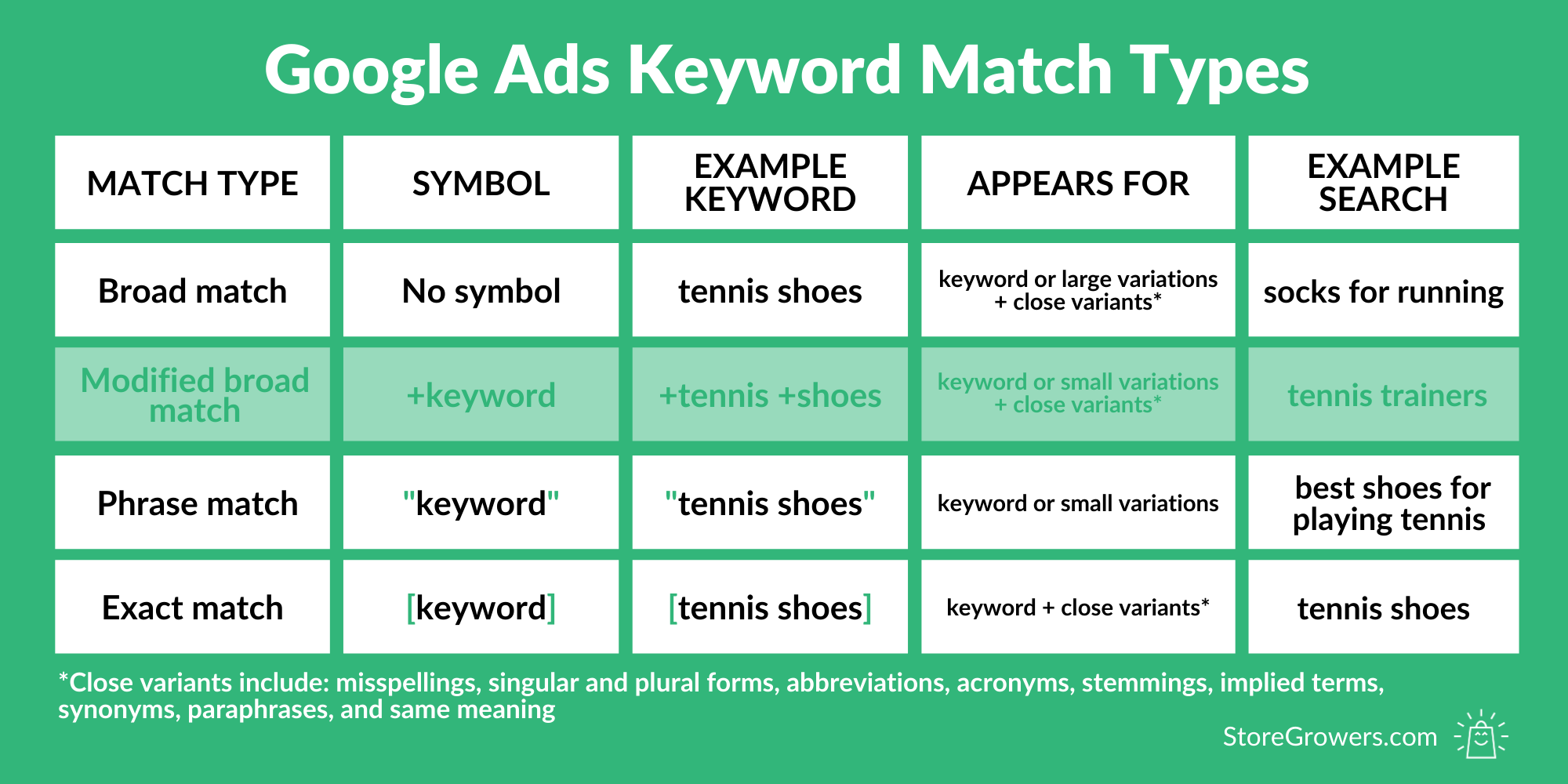 To get a better idea of what exactly is changing, let’s take a look at a graph that Google included in its announcement: 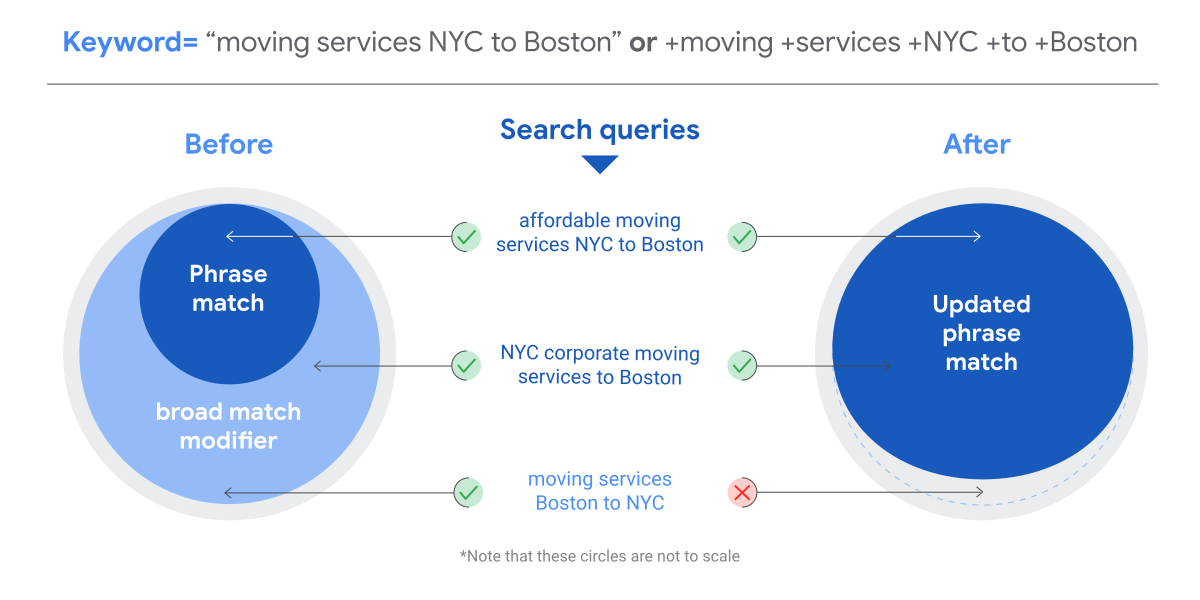 In the graph you might notice that the updated phrase match won’t cover all modified broad match keywords (see the little dotted line below the blue circle on the right).

For some queries, word order still appears to play an important role:

But this raises the questions how Google determines when the word order is important?

Are they the same?

A lot of these exact details are still unknown. Ands Google’s examples don’t help much. So in the next few weeks and months it’s going to be important to do the research to figure out the exact impact of these changes.

But let’s see at what we already know about the impact this will have on our campaigns!

What impact will these changes have?

One of the core principles to achieve good advertising performance is having a good account structure.

With Google Search Ads, that means you understand which campaign and ad group will serve an ad for a particular search query.

This change to the match types seriously shakes things up.

I rely heavily on broad match modifier in my Google Ads accounts. I mostly use it to find new search queries. So let’s see how my approach will change.

For existing campaigns, I see three big areas being affected:

If you have both modified broad match and phrase match keywords in your ad group, they will trigger the exact same keywords. This essentially makes them duplicate keywords, which is something you want to avoid.

For now, I would keep them both in the ad group, but over time, you probably have to focus on the phrase match only.

If you have ad groups that exclusively contain phrase or exact match keywords, this update is going to have a serious impact.

Many advertisers still use the outdated SKAG strategy, so they will have to revise their approach.

If you have to overhaul your account, it might be an ideal time to consider moving towards intent-based ad groups (IBAGS) instead.

If you have ad groups or campaigns that rely exclusively on phrase or exact match and use automated bidding, you can expect to see big changes in performance.

The target ROAS for each of the ad groups is different.

That’s because we’ve identified queries that can perform at a higher ROAS compared to the campaign average (ad group #1).

In Ad group #2 there are exclusively phrase and exact match keywords. The overall conversion volume is lower, but the ROAS a lot better.

If we don’t make any change, the phrase match keywords inside ad group #2 will start to show up for a wider set of queries. Which will drag down the overall performance and will probably mean that this ad group can’t hit the 1100% ROAS target any longer, and will lose visibilit as a result of it.

Our playbook for creating new campaigns will have to change. But with most of the details still unknown, I’m not forsaking modified broad match type yet.

For now, I’ll still include them as part of my campaigns.

But for those parts of the campaigns that need tighter control over which keyword can show, I’ll start using exact match instead of phrase match.

That way, I’m adapting for more keywords to come into the ad groups with phrase match.

I’ll also adapt my ad copy accordingly, that way it can support a wider variety of search queries.

Here is the timeline for the changes:

How fast you’ll see these changes in your account depends on your language: English, German, Spanish, French, Italian, Dutch, Portuguese, and Russian are included straight away.

For the other languages, the new phrase match will go into effect by July 2021.

As mentioned in this article, we know the changes are coming, but it’s still unclear how exactly they will play out.

Here is what I’m doing for now:

That’s all I have for now. As this is a pretty big change, you can expect more updates from us over the next few months.

Now I’m curious to hear your thoughts! Let’s hear it in the comments!