“Is it just me, or does everyone seem to hate their ecommerce platform?” 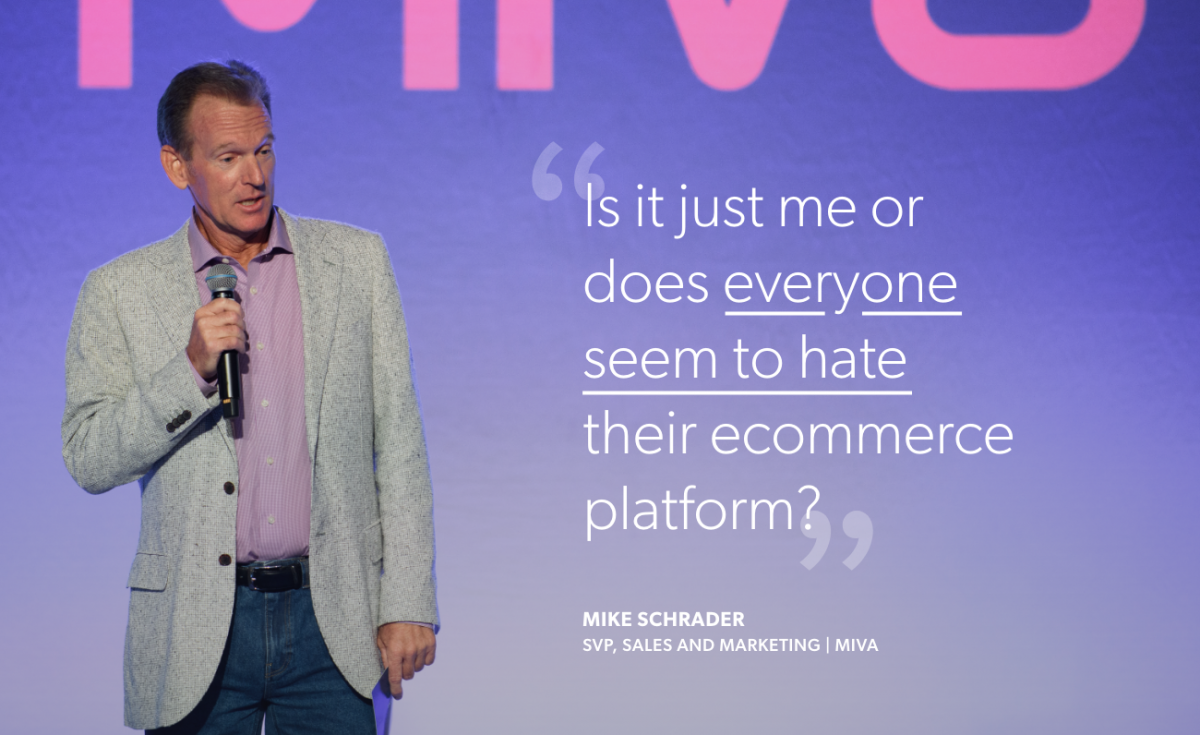 The list of usual suspects (aka vendors) can be broken out into two categories: SaaS platforms and open-source platforms. The big names in the SaaS world include Shopify and BigCommerce, while Magento leads the open source pack.

The big names surface in almost every angry conversation—not surprising based on their marketing budgets and market reach. They’re bright, shiny objects that seem safe at first glance, but buyer beware…all is not as it seems.

Those working with open source ecommerce platforms seem to be suffering from a technology-induced form of PTSD. Pummeled by the relentless grind of implementing an open source store (or, as one agency insider described it, “Another trip through the Inferno”) the open source user is akin to a person walking quietly and carefully across thin ice. At any moment, the other shoe can drop; a security breach, an enhancement request or a forced upgrade. Maintaining these sites is not for the faint of heart or organizations on a shoestring budget. A small army is required, whether it be in-house or via an outside agency.

The loudest voices from the SaaS side claim to be all things to all people, taking a chapter out of the “say anything to get a deal” sales methodology. All too often the buyer learns (post sale) that the rich functionality they were promised requires a few extra apps and extensions. And, in a move of amazing bravado, these platforms are claiming to be the ultimate integration hub for all things ecommerce. Ironic, seeing as integration is far and away the least effective portion of their offering. Think of a bowling ball with no finger holes and you’ve got the idea.

The most popular SaaS platform is going to make us all wealthy entrepreneurs…that is if you only have four SKUs in your catalog and an army of Influencers at your disposal. And what’s that behind the curtain? Chargebacks? Additional fees? Penalties? But don’t worry, you’re not alone, there are thousands of merchants in your same situation. You’ll know who they are because their website looks just like yours. And, again, get ready to shell out a few bucks for the apps and extensions you’ll need to run your online store, which will degrade your site performance but allow your users to do their laundry while they wait for your webpages to load.

The net of it? Open source provides you with out-of-control operating costs and no agility, while SaaS platforms put you in a box with very limited functionality and performance. It’s a hell of a way to run an online business.

All this has led to a high-stakes game of musical chairs with companies moving from one ecommerce platform to another…a migration of unprecedented proportions. A few years on the Magento open source platform, a year with a SaaS provider like Shopify or Big Commerce, and then the onset of overwhelming anxiety and the realization that no eCommerce platform can give them what they really need.

So what do these companies need?

They need a platform that can differentiate their offering online, drive higher revenue, and reduce operating costs. And (perhaps most importantly) a platform that lets them be agile, to have an idea on a Monday and have it live on their website by Thursday…all without having to rely on outside agencies or web developers.

Now this is not just a rant to bemoan the decline of the ecommerce platform industry. I do have a horse in the race. I’m the SVP of Sales and Marketing at Miva, a San Diego-based ecommerce platform provider. That bit above is exactly what we bring to the party. And, against all odds, we have a large, loyal, and enthusiastically passionate group of clients. More on that in just a moment.

I’m nearing the end of my third decade in the technology space and I’ve either competed with or partnered with the usual suspects mentioned above. And I understand why you’d go with open source…you can build a custom platform based on your business requirements and it’s hard to see the pitfalls of their offering until you’ve lived through them. I also understand why you’d go with a popular SaaS platform like Shopify—it’s a solid way to start a business but it’s hard to see that it’s not possible to grow a business on until you hit that wall.

In your defense, it is hard to sort through all the noise in the ecommerce space and it’s very hard to gain subject matter expertise without having to learn it the hard way (bouncing between insufficient platforms). A recently-signed client went that route and asked us at the end of our first demo, “Where were you a year ago when we made the move from Magento to Shopify?” Evaluating and selecting an ecommerce platform is an exercise in risk aversion and the big guys always seem less risky. However, as I mentioned above, the seemingly safe approach is rarely safe. My advice to you; make the vendor show you what they can do, not just tell you. Don’t believe what you see in a PowerPoint deck.

That brings me back to what Miva can do for you. I took this job because I was impressed with the Senior Leadership team and company culture. Before taking the job I never looked at the platform, but figured it had to be good because of the clients that have been around for five to ten years and up. I quickly discovered two things; Miva offers the Holy Grail of ecommerce platforms and has a large group of passionate clients who absolutely love us. When we use them as references our prospects think we’re paying them for their enthusiastic endorsements. We’re not.

“This is our third platform in as many years! Finally, a platform that does everything we need it to do and works perfectly without the suffocating cost of maintaining an open-source platform. Our Miva site has allowed us to scale with ease and focus on what is important to us; selling hinges and hardware and having an eCommerce site that is the best in its class!”

This Holy Grail of ecommerce platforms is a unique combination of a feature-rich platform (our User Guide is >1,000 pages) and a template layer that allows our clients to make customizations to their platform without touching source code. As mentioned above, an idea on Monday is in production on Thursday and no web developers are harmed (or used) in the process. Add to that an industry-leading API layer and it’s clear that Miva exists in a rarefied space. On one hand, you have the open source world offering a custom solution with a hell of a lot of baggage and SaaS platforms on the other side ready to lock you into a box of limited functionality and performance.

Miva resides in the middle ground between open systems and pure-play SaaS with a SaaS-based solution that offers superior security and Customer Service. Our average response time is in the seconds, not hours or days. And you actually get to talk to real people.

My career has been defined by working for David and fighting Goliath (Davids typically have better products, culture, and customer service) and the challenge always has been saving my prospects from themselves, preventing them from learning things the hard way. But there’s more than enough anecdotal information out there now about our friends in open source and traditional SaaS. Spend some time Googling popular vendors in these spaces…the stories are all out there and the chants of “I hate my website,” are hitting a crescendo.

We’re here to offer up an alternative to the usual suspects. If you’re looking for a platform that will allow you to differentiate your offering online, increase revenue while reducing your operating costs, and allow you to be agile in the process, then reach out and we’ll show you what we can do for you. And I promise you won’t end up hating us.

As the SVP of Sales and Marketing, Mike brings over twenty-five years of experience to Miva. With a wealth of professional experience in everything from supply chain to post-purchase, Mike has been on the front lines of ecommerce and is dedicated to enabling the growth and success of online merchants. Mike is an avid runner and UCLA graduate who spends his weekends working in his backyard vineyard.