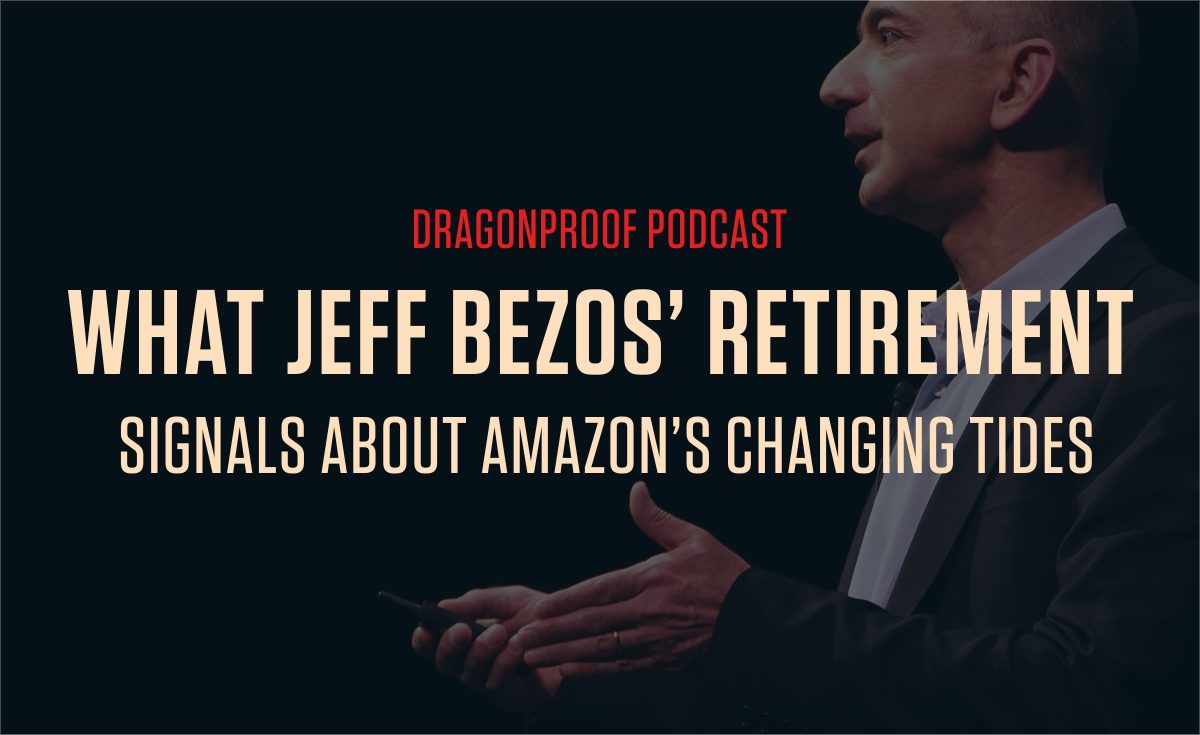 On February 2, 2021, Jeff Bezos announced he would be stepping down as CEO of Amazon. Miva’s own CEO Rick Wilson explored the implications of this news in the larger context of independent ecommerce on the latest Dragonproof Podcast.

A partial transcript is below. To hear the full episode, stream it now at Apple Podcasts or wherever you listen to podcasts.

Dragonproof: Here’s part of the statement Jeff Bezos issued to employees regarding his departure:

“If you do it right, a few years after a surprising invention, the new thing has become normal. People yawn. That yawn is the greatest compliment an inventor can receive. When you look at our financial results, what you’re actually seeing are the long-run cumulative results of invention. Right now I see Amazon at its most inventive ever, making it an optimal time for this transition.”

Rick, is Amazon at “its most inventive ever”? What are your thoughts on Amazon’s performance in 2020?

RW: It’s hard for me to say because obviously Bezos has perspective which includes stuff we don’t know about yet, but yes. They struggled in the beginning of COVID with warehouse management, but they certainly rode the wave.

Dragonproof: Obviously this past year was a game-changer in so many ways, good and bad. But before that, you wrote an entire book about the dynamics between Amazon and independent ecommerce. How would you sum up that relationship before 2020?

RW: A lot of sellers pre-COVID were worried that Amazon was going to keep gobbling up more and more market share, that Amazon would somehow control all of retail. I reject that idea. Their sales are growing steadily, but they’re growing in line with everyone’s. Retailers came out of 2020 and realized that there’s so much more opportunity and market available to them and that Amazon, while still the “dragon”, is something they can leverage.

Dragonproof: Jeff Bezos is going to be succeeded by Andy Jassy, who’s the leader of AWS, Amazon Web Services. That’s interesting…why is the “cloud guy” the one who’s taking over? What does that say about the state of ecommerce tech right now?

RW: Going back to the Bezos statement—and I’m not saying this to diss any of us, but ecommerce has become a yawn, right? We all expect it to just work. Other than getting stuff slightly faster, there may not be massive innovations in the online selling process. But there will be massive innovations in other areas. I think the cloud, and the infrastructure of AWS, is driving newer innovations. So that’s why I think a guy like Andy got put into that role.

Dragonproof: How do AWS and cloud services in general affect all independent businesses?

RW: AWS is essentially a huge version of what we would have called a “web hosting company” 20 years ago. It’s just an advanced multi-tenant version of it, where you can get servers anywhere around the world and you can load-balance them and spin stuff up. Amazon innovated the element of self-control. I can create an AWS account and right away I can create a server on the fly.

And then Amazon steadily added more features. Servers that used to just be blank hardware now come with interfaces that already do stuff. If you need an AI engine to interpret pictures, they have that. If you need a big database engine, they have that. They really think of it like a road system they’ve spent time and effort and money building so that the individual consumer or programmer doesn’t have to.

Dragonproof: Is the emphasis on AWS somewhat similar to Apple’s general move away from hardware and towards services? Can we predict that Amazon’s business model is going to follow suit?

RW: That’s a great question. I think that any business worth their salt knows that recurring revenue is the secret. And software as a service, or “SaaS”, is no different.

A well-run SaaS company is going to serve its clients a lot better than the old models where you buy something once and you have it until it breaks. Because the goal of a SaaS company in these circumstances is to make your life better every single day.

The old paradigm of single-use or temporary-use licensing for software and technology was inherently anti-consumer. Software just had to be “good enough” so that, when time came to replace it, you’d consider them again. I think today, what we all expect is high quality services that work. Now, if you’re trying to charge a recurring fee and your product sucks, well, you’re going to be in for a rude awakening as CEO.

Dragonproof:  SaaS is about personalization, being able to personalize what it is that you want and what it’s worth to you and how you’re going to use it. And that historically has been a huge drawback of doing business with Amazon as a seller…you can’t personalize anything.

RW: On the ecommerce side that’s absolutely true. They’ve made a little bit of progress on that. If you go to a brand store within Amazon, it’s somewhat personalized, but even that experience is janky. You see the Amazon header, and then you see another sub-header…it reminds me of iFrames. It’s not ideal. When you’re shopping on Amazon, they maintain control and I don’t see an incentive for them to change that.

Dragonproof: How viable is it to do a kind of mix-and-match as a seller now in 2021?

RW: It’s almost mandatory. So, if Amazon’s controlling 40-50% of online sales in North America, assuming you can afford the margins, Amazon should be 40 to 50% of your sales. And if they’re significantly more than that, then Amazon controls your business in a way that they shouldn’t. And if they’re significantly less than that, say you’re not doing any sales through Amazon, you probably should be.

Dragonproof: The only problem being that then you open yourself up to the Eye of Sauron…

RW: Yep, your products get you into so many issues there.

Dragonproof: Let’s say that, Rick Wilson, you are now the CEO of Amazon, effective noon tomorrow. What do you do on your first day?

RW: You take a sober look at your challenges. You have to empathize with why there is a faction of the American public and the American government who want to break them up. And then you need to ask yourself honest questions. Would they be better being broken up? Would it be better for AWS to be a separate company from Amazon, the retailer, and from Prime Video, from the streamer? You’ve got a Netflix competitor in there…you’ve got a cloud infrastructure competitor in there…you’ve got a retail business in there, and that’s not even counting their shipping company that competes with UPS and FedEx and the postal service.

You can’t let hubris cloud your vision. You must be honest with yourself as CEO of a business, whether it’s of Amazon or your own small business…figure out where your own “dragons” lie and make sure that the dragons don’t kill the dragon, so to speak.

Dragonproof: So for Amazon it really could come back to yet another “day one”?

RW: Jeff Bezos wouldn’t have made this choice if he didn’t think this was continuing the “day one” philosophy for Amazon. And that Andy was his best choice for continuing to create day ones.

If you look at Bill Gates as an example…he did a great job of giving up the reins. Now, I believe if you read interviews, Bill Gates would tell you it was hard for him, but he knew he had to just get out of the way to let Steve Ballmer and eventually Satya Nadella run the company. And Microsoft, especially lately, is really back at the top of its game. And so I think Andy’s challenge is going to be just “Jeff, step out of the way.” And if Jeff does, then I think Andy has got a chance to take Amazon to new places that Jeff couldn’t see. I mean, I don’t care how brilliant and smart and successful you are. Every one of us has blind spots.

Dragonproof: Should independent sellers care about this news?

RW: For your average ecommerce seller, it doesn’t matter in any practical sense. I don’t think their business is going to be different tomorrow than it was yesterday. But I think any successful entrepreneur has to be a student of business. I think there are very important learnings happening right now. I think you study what Andy does. You study what’s different. Same with Tim Cook and Steve Jobs, same with Bill Gates and Steve Ballmer and Satya Nadella.

You study these things to glean insights into how you can be a better leader. This is a time of change. It’s the time where you get to see a little bit behind the curtain. And it’s going to be a great time, from that perspective, for independent entrepreneurs to learn how to become better business people.

Stream the full audio episode of this interview here.