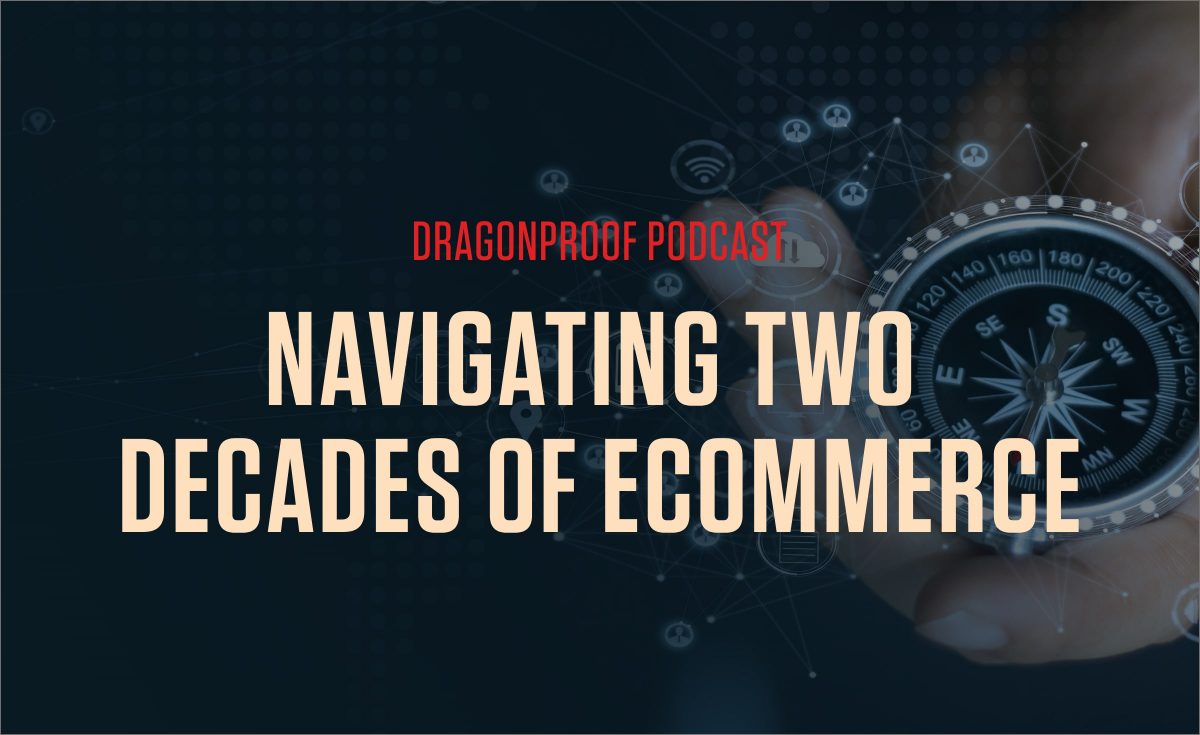 The first quarter of 2021 strongly suggests that last year’s ecommerce gains are here to stay. While the boom and ensuing gold rush are most obviously attributed to the major shift in consumer behavior brought on by COVID lockdowns, it’s valuable to view the current state of ecommerce as the next logical step in a 20-year story of incremental adoption.

On this week’s Dragonproof Podcast, Rick Wilson invited ecommerce veteran Todd Theodossin to share the story of his business’ progression at 3 key junctures which will be familiar to all online businesses. Each stop on the timeline demonstrates the major hurdles that the industry has grappled with on its road to today’s “overnight success.”

Working in conventional sales at the end of the 90s, the toughest customer Todd had to pitch was the physical manufacturer who for the most part “didn’t know what the internet was.” Indeed, the biggest challenge at the beginning of ecommerce was convincing well-established producers that online selling was viable, safe, and worth any investment at all.

Early shopping carts were clunky and unreliable, adding to the cobbled-together, frontier-like feeling of nascent ecommerce. Simply getting a firm to allow its products to be drop-shipped via an ecommerce store was difficult, driving adventurous entrepreneurs like Todd into creating independent businesses which primarily existed online.

A decade later, ecommerce sales accounted for over 6% of all retail. The sellers of the early 2010s had proven the concept, with ecommerce platforms leaping forward in sophistication every year. Todd’s business, MyPaperShop, had grown wildly in volume and reach, and as competition evolved, shifted into a new way of thinking about ecommerce priorities.

Whereas an online business’ primary concern had once focused on logistics and costs, the new decade saw a shift towards content and search ranking as critical tools. This represented a huge sea change in thinking, as it became clear that digital, non-physical aspects of a business were as important as the goods it sells.

Google had emerged as the primary gatekeeper of search, content, and traffic, and thus became the next major battlespace for ecommerce sellers. Its named algorithms, such as 2011/2012’s “Panda,” were opaque rules, rewards, and penalties which shaped commercial content. Ostensibly designed to improve quality, speed, and accuracy of search results, the algorithms required costly reverse-engineering by online sellers, in order to rank and draw traffic. Todd essentially had to become a master of content writing, keywords, links, and site organization, for the purpose of satisfying rules which were never explicitly articulated anywhere. This task was complicated by content “poachers”, intellectual property thieves who would copy product content with impunity and undercut thousands of hours of work.

3. The dominance of marketplaces

While trying to parse Google’s requirements, a new existential threat was slowly growing—the rise of the marketplace. By the mid-2010s many indie sellers had opened Amazon channels for their products, which unfortunately exposed them to even more brutal poaching. A common practice saw FBA vendors pillaging keyword content, meta-descriptions, and the products themselves, using Amazon as a pseudo-wholesale direct channel priced at margins which would be utterly unstainable for existing drop-shipping models.

Meanwhile, the decade saw a huge influx of international firms which capitalized on this ability to wholesale directly to U.S. consumers, flooding the market with cheaply produced and knockoff products which no longer required a local “middleman” to broker with the public.

Throughout this time, Amazon sales were growing by 20% or more per year, training audiences to expect speedy access to nearly all retail products. Public appetite for marketplace ecommerce drove brutal competition in the space, placing independent businesses like Todd’s in a tight spot—squeezed by shrinking margins, content theft, undercutting by international suppliers, and the still-crucial role of Google as an arbiter of traffic.

Reimagining ecommerce in 2021 and beyond

Battle-hardened by each era’s successive challenges and “villains”, ecommerce as a whole met 2020 with the infrastructure, digital tools, and selling culture required to thrive in the worst of times.

Still, while many have succeeded, businesses from SMBs to legendary retail titans closed their doors in the past year. Todd, who made the difficult decision to exit MyPaperShop in 2019 due to all of the aforementioned conditions, is greeting the new business landscape the way all sellers are – with fresh, hopeful energy bound by the practical understanding that today’s context will always give way to new problems, and new opportunities.

Listen to the full story of Todd’s journey through key moments in ecommerce history here: